The use of non-cryogenic “dry” (lithium deuteride) fuel was a spectacular (and disastrous) success with a yield far exceeding expectations. The Bravo test created the worst radiological disaster in US history.

An hour after the shot Navy ships 30 miles south of Bikini found themselves being dusted with fallout with deck radiation levels rising to 5 R/hr. navy personnel were forced to retreat below decks and the ships retreated farther from the atoll. As the fallout drifted east U.S. evacuation efforts lagged behind the plume. At Rongerik, 133 nm from ground zero, 28 U.S. personnel manning a weather station were evacuated on 2 March but not before receiving significant exposures. Evacuations of the 154 Marshallese Islanders only 100 nm from the shot did not begin until the morning of 3 March. Radiation safety personnel computed that the islanders received a whole-body radiation doses of 175 rad on Rongelap, 69 rad on Ailinginae, and 14 rad on Utirik.

The Marshallese Islanders on Rongelap, Ailinginae, and Utirik atolls were blanketed with the fallout plume, as were U.S. servicemen stationed on Rongerik. The Japanese fishing vessel Daigo Fukuryu Maru (Fifth Lucky Dragon) was also heavily contaminated, with the 23 crewmen receiving exposures of 300 R, one of whom later died – apparently from complications. This incident created an international uproar, and a diplomatic crisis with Japan.

After this test the exclusion zone around the Castle tests was increased to 570,000 square miles, a circle 850 miles across (for comparison this is equal to about 1% of the entire Earth’s land area). The entire Bikini Atoll was contaminated to varying degrees and plans for conducting test operations from the islands, including use of the firing bunker, had to be abandoned. All further Castle tests were controlled by radio link from the USS Estes.

Operation Argus was the only clandestine test series in the 17 year history of atmospheric testing.

It was secretly conducted in the South Atlantic, 1100 miles southwest of Capetown, South Africa. The motivation for the secret series of tests,  “Argus tests was a theory developed by the brilliant but eccentric physicist Nicholas Christofilos at Lawrence Radiation Laboratory (LRL). He had predicted that military significant effects would be produced by injecting charged particles from nuclear explosions into near space to create artificial Van Allen belts. This series sought to prove (or disprove) his theory by actually creating such a belt. Operation Argus has been termed the “world’s largest scientifc experiment” encompassing as it did the space surrounding the entire Earth. The tests essentially confirmed his predictions.

Mislabled, not about the Tsar Bomb. 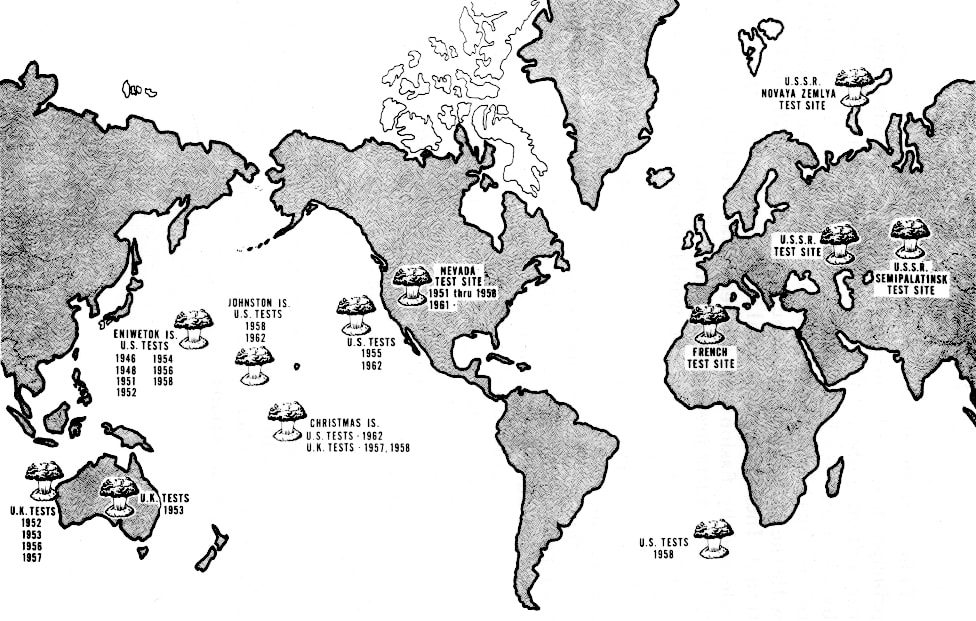